How Does Breastfeeding Mother Fly?

First, how to breastfeed your baby on the plane?

For mothers who are breastfeeding directly, it is best to choose breastfeeding for the baby on the plane, such as the first row of economy class or the window seat. Then it is best to be able to carry a breastfeeding scarf or a large scarf that covers the upper body so that mothers can breastfeed the baby directly on the plane without having to go to the small cabin bathroom. If you want to breastfeed your baby with a bottle, mother can carry the Breast Milk Ice Pack or frozen breast milk on the plane, and then ask the cabin service staff to help you heat up. How to carry the breast milk specifically on the plane or how to check it, we will talk about it in detail below. 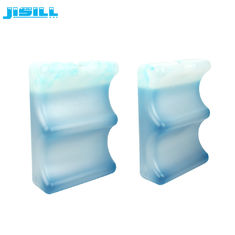 Second, how to carry or check breast milk and breast pump on the plane?

1. How much breast milk can I carry on the plane? Will breast milk be sampled by security personnel?

Some mothers will care about how much breast milk can be taken to the aircraft in the end. The policies of different countries are different. In the United States, it is usually stipulated that the liquid to be carried can not exceed 100ml, but for the special liquid such as breast milk and formula, it is allowed to carry more than 100ml on the plane, and does not limit the amount of mothers carrying breast milk, regardless of the mother. Whether you have a baby with your plane, you can carry breast milk and formula in unlimited quantities.

If the flight time is short, the mothers usually choose chilled milk plus a cooler and Small Slim Ice Packs. If you don't want to carry it all, there is no problem with the shipment. When the mother checked the baggage, they told the ground staff that there was cold milk and ice in the baggage. They usually put a note on the bag, but they may still be unpacked after the check, but the security personnel will not pollute the breast milk. If it is frozen breast milk, it will need to use dry ice and cooler, which is sold in many American supermarkets. It can also be checked in the trunk, with the ground staff indicating that there is frozen breast milk, indicating the dry ice use and weight.

Preparation before going out: Be sure to bring a cool sealer, ample ice packs, empty bottle bottles or breast milk storage bags. The capacity of a single bottle or storage bag should not exceed 100ml. When packing the baggage, be careful to separate the container containing the breast milk from the other baggage separately.

The above is how breastfeeding mothers take their children to fly. Have you learned?